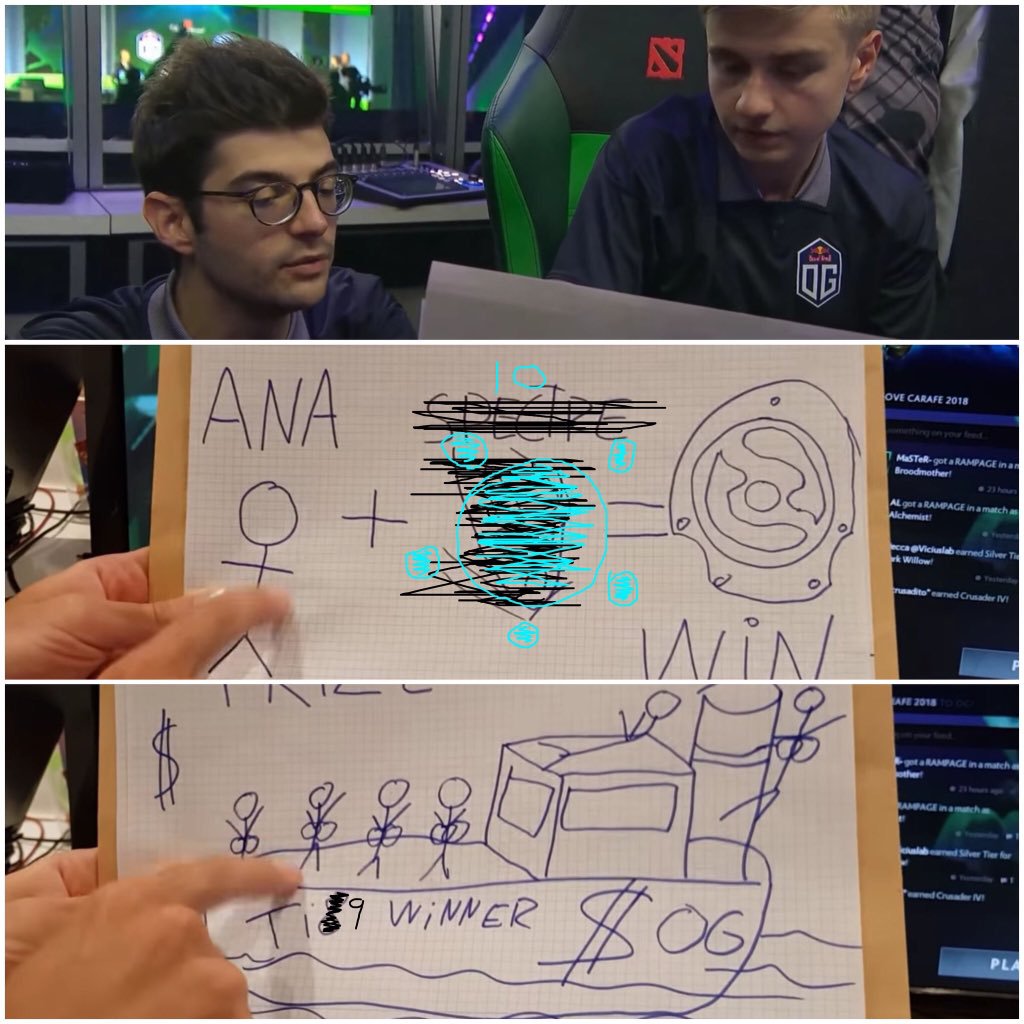 Only five players win The International every year but thousands of players win their battle cup bracket every weekend. You may never hoist the Aegis but you could be the owner of a trophy that lives on your Dota 2 account!

Here are some powerful draft strategies to try out for your next battle cup drafts.

This team strategy is all about causing chaos in fights by creating many different targets. What these heroes have in common are abilities that put a ton of pressure on enemies to right-click.

Weaver has The Swarm which attaches bugs to the enemies that reduce their armor and damage them. Pugna has Nether Ward which drains mana and damages heroes when they cast spells. Phoenix has Supernova which deals damage and has a large area of effect stun. Shadow Shaman has Mass Serpent Ward which summons wards that do a lot of damage. Undying has Tombstone summons zombies that do damage and slow the enemy.

When these spells are used in combination, the enemy is going to have a tough time fighting. They will have to run away or choose a target. Either they try and focus a hero down and then the abilities like Nether Ward, Supernova, and Tombstone get stronger, or they try to take down The Swarm, Nether Ward, Tombstone, Mass Serpent Wards, and Supernova which allows the heroes to attack freely. If they run away then Weaver, Phoenix, and Pugna have great chasing abilities.

This team is also great at pushing. Shadow Shaman and Pugna have great pushing abilities and with the Tombstone, you can control the high ground area while you damage towers.

Every hero combination has its weaknesses and this team is no different.

Since this team is putting a lot of pressure on the enemy to right-click their abilities, ban heroes that are great at right-clicking. Heroes like

Lina can attack quickly from a long distance.

Juggernaut can become magic immune and right-click down the Tombstone or Supernova.

Bristleback just runs in and right clicks without fear.

This team is also vulnerable to a large area of effect team fight abilities since this group wants to fight near each other. Heroes like

Faceless Void can take advantage of that and disable multiple heroes at once. Ban these heroes and you’ll have a great time!

Ever since Grimstroke was released, players have been using him to pull off combos. Since his ultimate Soulbind makes abilities affect heroes that are chained, this hero is a classic combo creator.

Doom and Grimstroke is not a new strategy but it’s still strong. You could potentially pull off a five hero Doom if Doom or Grimstroke have a refresher orb or refresher shard. If you don’t win the team fight after that then I can’t help you.

Grimstroke and Warlock is a combination that isn’t too popular but it’s deadly. Warlock has Fatal Bonds which makes enemies share damage. If used properly this spell can be a fight winner. If you can stack it with Soulbind then enemies will have no choice but to run away. This hero combination was talked about in-depth in this article.

Grimstroke works well with many different heroes as his ultimate is a natural set up for jaw-dropping combos.

Doom, Grimstroke, and Warlock aren’t heroes that are known for their mobility. This means heroes with great mobility might be able to run away after your abilities are used to reset the fight. This would be very annoying to deal with so ban high mobility heroes like

Other heroes to ban out are tanky heroes that want you to use abilities on them. Heroes like

Abaddon are hard to kill and you don’t want to use your huge abilities on them.

This team is all about not dying. Every hero in this list has heals and saves. If you stack them together then the enemy will have a hard time fighting you. You have a global save with Treant Protector’s Living Armor and each hero can heal themselves if they get gone on.

The strategy here is simple. Group up and keep each other alive while Huskar shreds everyone. He is your main core and it will be a 4 protect 1 strategy with Necrophos being a core as well. Huskar is hard to kill and with all the protection provided from his teammates, he'll be able to play aggressively and fearlessly.

You'll be able to slowly walk down a lane and anything that gets in your way will get destroyed.

You will want to ban heroes with high burst damage potential.

Phantom Assassin might two-shot someone if she gets lucky with crits and that's not enough time to save your teammate.

Zeus has huge burst damage potential and it would be better just to ban him.

Lion can burst heroes with their ultimate as well.

Silencer would be a good idea too since Global Silence can prevent any saving spells from being used.

Enigma is also a good ban because you want to stay grouped as this team and Enigma wants to see you grouped.

Ancient Apparition is a must since he is the ultimate heal counter.

This team is all about global presence and picking off enemies one by one all game long. All these heroes can move across the map well and snowball off kills.

Spirit breaker can start the fights by picking a target and initiating. Storm Spirit can follow up by zipping in and comboing them, and Nature’s Prophet and Zeus can help with burst with their ultimate abilities. Spectre can haunt in and get those kills for maximum farm efficiency.

This strategy is more difficult to pull off and requires coordination and timing between five players. If done successfully, this can be a fun draft to play and a keyboard slamming frustrating draft to play against.

The goal is to pick off enemies one by one all game long. This builds momentum and net worth advantage in your favor and eventually, you'll be so ahead that pushing into their base shouldn't be a problem. If the enemy constantly has one or two dead then they have to play passively all game long.

If the game draws out you have great answers to that to. With Storm Spirit and Spectre your late game is strong and with Nature's Prophet you can keep split pushing the map all game.

Banning saving heroes is a good idea here. Since you want to zip in, kill, and run out, you want to make sure you get those kills. This is why banning

Treant Protector, and other saving heroes should be done.

This team is all about grouping up, pushing towers, and bursting down enemies if they dare fight. Multiple heroes here have armor reduction spells like Vengeful Spirit’s Wave of Terror, Dazzle’s Bad Juju, Shadow Fiend's Presence of the Dark Lord, and Tidehunter’s Gush. If you stack these then the enemy will probably have negative armor and Shadow Fiend and Drow Ranger can rip them apart. With the negative armor and damage buff from Vengeful Spirit, even the supports will do massive right-click damage.

To pull this off, you want to group up and push towers. Put Tidehunter in the front since he's one of the best heroes to tank an initiation and everyone else behind him. If enemies try to fight into you, then a Ravage into right clicks from the team can do huge burst damage. You can then just run down a lane and push towers fast.

You probably don’t want to have your backlines compromised. With Tidehunter on your team, you want the enemy to go through him before your ranged heroes are being attacked. Banning

Night Stalker would be wise because these heroes can appear out of nowhere and cause chaos to the backlines.

Faceless Void would be a good move to since you want to be grouped up and these heroes love it when their enemies group up.

This team is pretty straight forward, just push until you win. All these heroes are great at damaging towers and if you combine a few of them then towers will fall easily.

Hopefully, your laning phase doesn't end so horribly but even if it does, that won't be a big deal since you can claim towers quickly. Once you hit your level six timings, killing tier 1 towers will be easy. During this timing, chances are the enemy cores want to keep farming so they’ll be in the jungle while you push towers.

Then the next timing of level 12 will happen and tier 2 towers can be pushed easily. This time the enemies might want to fight but this team is well equipped for team fighting as well.

This team is all about objective-based gaming. Get all the tier 2 towers around the 20-25 minute mark and then get Roshan. After that, you can pressure tier 3 towers and barracks before the enemy has a chance to get their items online.

Imagine pushing as 5 with a creep wave and Nature’s Prophet’s treants. Then

Earthshaker jumps in and echo slams and gets a rampage. You don’t want that to happen so ban him.

Other heroes to ban are

Magnus so you don't get three-man Reverse Polarity into Skewer into tier 4 towers while you’re pushing. Heroes that are good at counter pushing are worthy of bans too. Heroes like

Shadow Demon should be considered for bans.

Which team did you like the best? Which hero combinations have you tried out in the past? Will you be using any of these drafts for the next battle cup tournament? "team right click this" is the only interesting draft. Other "teams" are hyperbolized trash team right click this... like who came up with that a u t i s m... hoooooly shit if someone ever picks that vs me i willl fucking scream in all chat every 2 minutes

Are these just memes? A lot of these can’t be utilized because of lack of position, or weak laning Here are my own strat

Overkilled
- Lina
- Lion
- Grimstroke
Better than Doom and everyone is dead

OPFROG DUNK
- Earthshaker
- Morphling
- Alchemist (optional)
Get agh's and WELCOME TO THE JAM!!! Many useful auras and lots of damage from Drow's passive. Big push potential.

I played a lot of Venge. Replace Dazzle with Weaver 4 and you get rid of counterpick, with aghs time lapse subatituting grave. Just don't lose to Team Pub - pudge techies windranger wk lion. Everything here is "Sounds good, doesn't work"
Team no armor might work tho.

Team Right Click this? Don't you mean crash all of your computers??? That is going to cause a lot of cpu aneurysms... You thought the Monkey King ult was bad performance wise... Drafting gods on the forum = dellusional dogs in picking phase Team Heals and global... who made these up ? seriously