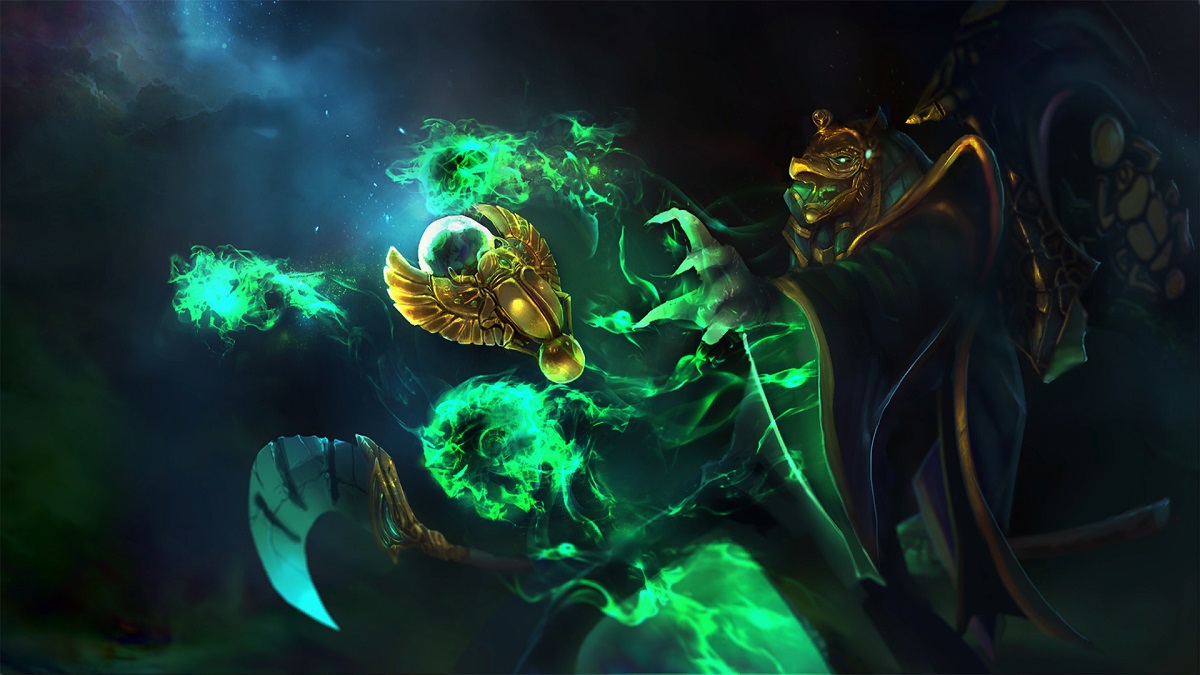 At the time of writing, Necrophos is the worst hero in Dota, at least when it comes to higher-level pubs. In Divine+ games he is considerably less useful than Pudge and Techies, so the natural question arises: what the hell happened? Today, we would like to have a look at why the hero is that bad and is there a way to make him work or at least a modicum of reason to try.

The reason Necrophos even got on our radar was the fact that he is among very few heroes who were almost completely ignored in all DPC matches across all regions. Professionals simply don’t want to play him, and there must be a good reason for it.

Looking at current win rate statistics, the win rate delta between Divine+ games and all other lobbies is exceptional for Necrophos: the hero goes to as high as 52.5% in Legend, keeps 50%+ until Divine, and then drops to below 37% win rate in 5k+ games.

The natural conclusion is that the hero has some hard to utilize properly, but incredibly effective counterplay options and it is the reason Necrophos is heavily struggling against better players and is virtually ignored by the best of the best. So what do better players know and use, that makes Necrophos so bad?

Let’s start with obvious things: base stats, especially base damage is a lot more important to higher level players. The +1 Armor or +3 Base Damage patch notes might look, sound, and feel like a meme by IceFrog, but we assure you, for professional players and even high-level pubs players it matters a lot since these changes can really change particular matchups.

For two Crusader players, duking it out and missing >30% of all last hits and denies, the Base Damage comes into play rarely. For someone playing Necrophos in 5k+, his ~49 starting damage is a pretty big problem. Especially given unideal attack animation and low projectile speed.

Add to it the fact that the “wave clear” Necrophos forces him to step into the creeps, which automatically allows for punishment from the enemy. And it doesn’t matter whether Necrophos is being played in the mid lane or in the offlane: he just can’t apply proper and consistent pressure against better mids and carries.

These heroes are picked because they are good. They are slightly ahead of the power curve and as such get a disproportionate amount of attention. If option A is just 1% better or perceived to be better than option B, it will be picked a lot more: that’s how higher-level competition works in most games. In a sense, it is just bad luck for Necrophos that most “1% better options” are really good against him.

Power creeping can be a problem in any game, but Dota for the most part has managed to stay away from it. Over the years heroes have not gotten strictly stronger or strictly weaker, but rather more defined: both their strength and weaknesses were made more apparent, keeping the balance more or less intact, while making sure many heroes are viable and all of them have a distinct purpose.

Necrophos currently lacks that purpose, it seems. He is not necessarily weaker than other heroes, he is just not as defined, hence other heroes looked power creeped by comparison.

Reaper’s Scythe is no longer as good as it once was. We are not advocating for the return of “no-buyback-for-you” mechanic, since it broke the fourth wall a little bit too much and was, indeed, a bit too strong, but right now Reaper’s Scythe can’t even accomplish the “desynchronize enemy respawns” gameplan.

Previously, especially later into the game, Scythe was feared not only because of the potential damage but because of the additional respawn timer. One could essentially desync the enemy team with Aghanim’s, applying constant pressure and making sure the enemy never gets to fight 5v5. Now, with a fixed 120-second cooldown it is still possible, but only very, very late into the game.

Any lack of identity can be brute-forced through sheer stats and many, including ourselves, believe it to be the case with the current iteration of OD. However, as discussed previously, Necrophos is lacking in this department as well, so the end result is not surprising.

The hero is simply not good on average and he doesn’t have games where he is the absolute best pick, since he doesn’t have a particular identity. The latter point is a bit of an exaggeration, but the games where Necrophos is good through his Heartstopper Aura, the sustain, and a built-in physical damage mitigation are close to non-existent, especially in higher-level lobbies.

When starting this post, we set out to find if there is a modicum of reason to play Necrophos right now and sadly, there isn’t. The hero isn’t weak in a way that smart play and high mechanical skill can overcome it. The hero can’t be “trained” to a point where he is really, really good. There isn’t a magical build, that can change how the hero is played. He simply doesn’t fit all too well right now. I often feel like players lament heroes being 'trash' while forgetting that, from a drafting perspective, the hero is in the spot it needs to be. Wisp and Batrider are commonly used for this concept. It's nice to see a post that directly references this concept to describe why a hero is ACTUALLY struggling, not just an anecdotal hatred for it. it's a shame for necro. Valve killed this hero

Thankfully I don't deal with this because I'm still in Legend, 61.8% Necro winrate babyyyyy His current aghs feels so lacklustre, reverting it to being a 30 second cooldown would make necro far more relevant again Necro is super boring and adds almost nothing to the game. No loss. they need to make the ult affect reincarnate tbh

I really think the largest issue is that his passive is completely useless at every stage of the game. It just isn't going to do enough damage at any stage of the game. And it's about time that Ghost Shroud doesn't make him weaker to magic damage; popping that skill in theory helps you survive but in any game there is going to be someone taking advantage of the situation. He's too slow too, needs to be a lot more like Death Prophet in that respect. Necro is not necessarily bad and it will become a monster with the next patch tweak, just as OD wasn't that bad before the last patch. People have tendencies to wait till a hero is obviously broken to start playing it rather bothering with it's unrefined state.

Necro used to have the highest winrate in dota, now he is at 50%. Basically he fares well at herald bracket but becomes totally useless in divine brackets. Brain dead hero, who wants to play? Sad, I used to play a lot of necro, by far my most played hero.

My buddy plays him, but not for about 6 months.