How To Play Perfect Dota 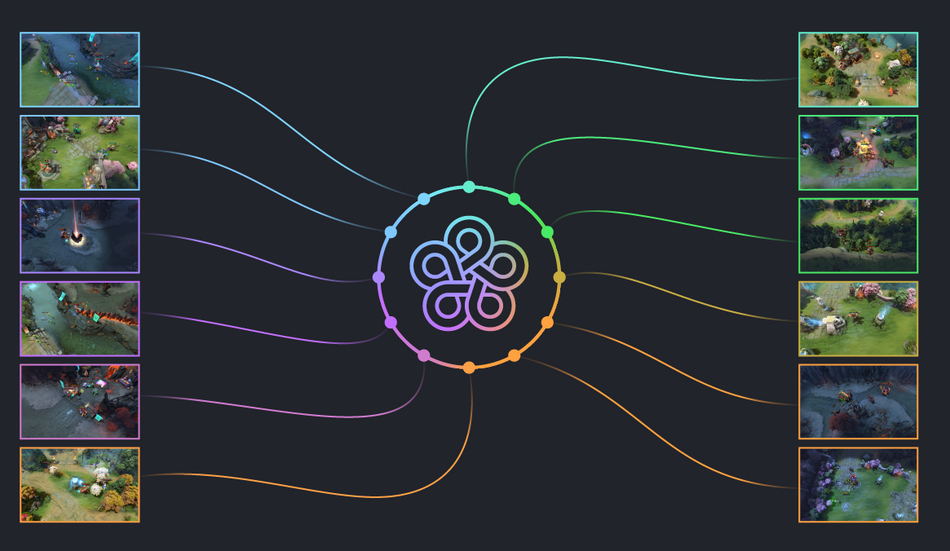 OpenAI Five has a near perfect record against humans in Dota. But the success of AI in gaming hasn’t brought dismay to its community, as it did when machines defeated the best players in Go and Chess.

Last week, OpenAI Five crushed the TI8 champions, OG. In the post-game comments, captain NoTail predicted that his team could adapt and take at least one game out of five. There was no encore performance at the event, but now in a limited release, called OpenAI Five Arena, the rest of the public has had their shot at Open AI, with as many attempts as humanly possible. So far, OpenAI Five bots has a 99.3% win record against humans, but Dota is far from a solved game.

That’s for the competitive mode, where you can recruit your own team of human members to compete against five bots. For a more serene experience, in cooperative mode, you can play with bots, with or without other humans.

When playing against the bots, humans have described it as a futile effort. They machines micro perfectly. They understand the pixel perfect ranges of spells and attacks, the microsecond differences between cast and attack animations, and they can dance around these parameters with uncanny precision.

Crystal Maiden’s AI thoroughly outplayed Topson, one of the game’s top mid players, by manipulating the parameters of Shadow Amulet, spellcasting, highground vision, night vision, fog of war, and Sniper's cast and attack animations. Throughout game 1 against OG, the AI was also able to micro their heroes to turn between Riki’s Blink Strike animation, effectively negating the Backstab damage.

It seems reasonable that the community has retreated to mechanical skill as a way to rationalize our inferiority. We can understand being slower than a machine. Or else we would have to admit that these machines are also besting us in Dota with traits that are innately human: insight, intuition, and creativity.

Humans have had some success at abusing our unpredictably, but this could easily be due to a lapse in its programmers rather than the ability of machine learning to adapt. Bots, so far, have been poor at detecting invisibility, keeping their courier alive, and chasing a hero through the trees. They can be preemptive with their ultimates and BKB activations, leaving an exploitable window down the line.

And yet, the bots still win, almost all of the time. Our ability to make snap decisions without thinking, from intuition and our gut, is still based on our experience. Highly skilled players innately understand good and poor matchups, the likely locations of heroes off the map, or whether a fight is good to take or not—without having to rationalize the chain of events.

OpenAI has learned from their mistakes as well, but they have 45,000 years on us, and they remember every moment of it. The result of a teamfight is determined before it even begins. They’ve weighed risk and reward, and they understand the result of a teamfight before it even begins. If they initiate on you, the bots understand the odds are in their favor, once they unload all their spells, in proper succession. Can your team do the same?

““All of this has happened before, and it will all happen again.””J.M. Barie-Peter Pan or Battlestar Galactica

Like a perfect blackjack player, they know they odds, and they make the most optimal decision, all the time. And each decision, from what fights to take to what lane to pressure, forges a path towards winning. It’s easy to surrender that bots are just mechanically better in inhuman ways, but through Dota it seems that they might also be better at making human-like decisions.

Playing with OpenAI, as the only human in cooperative mode, is like playing with a stack of your better skilled friends. They have exponentially more experience than you, and their decisions are infallible. If your team is failing, there's only yourself to blame. So why make any decisions at all? It's better to just surrender to the will of the team, move along with the machine, feeling as though it might be better off without us in the end.

Yeah... um it's cool story bro. But these bots need to get the full hero pool before I will consider them good at Dota. Tokadub. Openai wont release full hero pool in public if they know its not pro level. Thats why they didnt release 25 hero version and instead released 17. But expect a good at dota bot if ever they released one.

Full hero pool OpenAi is question of when, not if.

I guess people were scared and skeptical the same when they saw a steam railroad locomotive outperforming horse carriages aprox. 200 years ago

I think OpenAI would need many years, maybe even up to a decade or two, to learn Dota to win at professional levels, if they played it at its fullest form. All heroes available, all items usable. Imagine the billions of intricacies involved in the team compositions alone: the bots would get dumbfounded in the draft alone. With each pick, comes different matchup knowledges, different ways to play, different interactions.
How do they account for more technical heroes? Multi-unit micro heroes like LD, Meepo, Invoker, Visage, Chen, etc?
Mechanically, sure they’d be able to match up to pros. But will they be able to truly process everything? It will be a while. Can't wait to play against them, but with all heroes unlocked. I think OpenAI would need many years, maybe even up to a decade or two, to learn Dota to win at professional levels,

Did you read the the article for f*ck sake?! OpenAi already win against OG, the 1st champion of TI8

^you’re an imbecile. You conveniently cropped out the phrase immediately after “if they played it at its fullest form”. Currently, OpenAI is restricted to a select SET of heroes, and also have restrictions on a few items. The winner of TI9 @ETdAWESOME lol Mr Niceguy is just a name huh? If not a sarcasm

Btw, the hero with the highest winrate against the AI is Riki. For exactly the same reason why he is broken on pubs, because most of the time not even the AI will have true sight. The OpenAI developers made a huge mistake and decided that only the 2 supports on the team should carry true sight so their cores cant never kill you without help from their supports unless if they have enough damage to kill you in 3 seconds. So get Aeon Disk and split push your way into victory.

I managed to get dozens of wins against the AI just by playing Riki. Turns out the AI will only try to reveal you if they see you going invi, which means once you get level 25 and get Clock and Dagger Doesnt Revel you are a fucking god because the AI doesnt even try to revel you unless if you go under tower.

If they counted Cooperative games I would already be in the top of the Leaderboards. Now I am trying to find people to team up with me to exploit Dota most nonsense mechanic into countless easy games.

People might complain why the restriction of Summon (Necro) or Multiple unit (Manta) items at this time. I've been thinking about this for quite some time now and they might just wanna reconsider this kind of rant.

The moment heroes like PL, Meepo, Arc Warden, Chen, Lone Druid (possibly the easiest case here) enters the OpenAI hero pool, I am expecting a ton of further negative rants from the community regarding the superior ability to micro manage far from humans. You might see 4 or even 5 meepos farming different parts of the map if they see it optimal and can easily poof to a single location needing a response.

Also, how about a 100% manta dodge every time whenever possible? :)

I am also thinking how will the AI learn to use "delayed" spells like Lina LSA, Mirana arrow, Pudge hook as these skills need an "advanced" perception where the target is going to by the time the spell lands without any initial stun coming from another source. Or probably now, they won't throw anything at all without a prior lock down.

Might as well reduce hero pool to 10, then you get 100% winrate all the time! why do people have such a hard time understanding that the bot is improving? when it finally plays dota exactly like everyone else does then will it not count because "theyre not really moving their mouses in a fair way, not real dota"? One of the biggest issues of a human team is communications.

Where there any infos if open ai has a need for communications?
Or is it more like one instance of open ai is controlling all 5 heroes? I'll be honest it felt more like watching a dota 2 aimbot than some omnipotent being.

You might see 4 or even 5 meepos farming different parts of the map if they see it optimal and can easily poof to a single location needing a response.

Yeeees hahahaha, maybe even worse in case of arc warden full items micro, or PL running every clone to every direction possible, or Chen pulling and stacking while stayed in lane